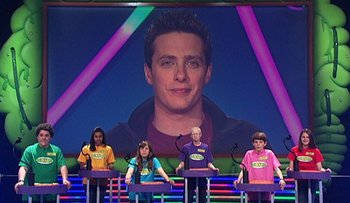 A 2009 Nickelodeon Game Show, based on the Japanese format Brain Survivor, which marked the channel's first new major foray in the genre in quite a while (which is impressive, given that this was the innocent cable channel behind Double Dare, the codifier of the "messy children's game show").
Advertisement:

The game primarily tested the memory and comprehension skills of the contestants. The first round, "Brain Tease", started with six contestants trying to quickly figure out the numbers conveyed visual puzzles, entered on keypads. Then, sans the two lowest scoring contestants (who have to go down ... the Brain Drain!), the remaining four in turn played Level 2, where they were told a story from the "Big Book of Truth" and had to answer questions based off it, locking in by sitting on a chair covered in Whoopee Cushions. The first to answer incorrectly is greeted by farts, and gets pulled backwards through the (paper) teeth of a giant mouth made to look like Jeff's face. This then continued until someone else answered incorrectly, who also faces the same fate.

For the final round, Level 3, the two contestants play a matching game with eight pairs of pictures from the story. If a player fails to match, the other player can automatically win if they make a match on their next pick, who then got to play the Bonus Round.

Its third and final season brought some major changes; along with being moved to Nick @ Nite (before being moved back to Nickelodeon in October 2011, and a brief burn-off of remaining episodes on Nick Toons a few years later), it became Family BrainSurge, played with five teams of two. Other adjustments included only playing 4 puzzles in Level 1, and the addition of a lifeline in Level 2.

Jeff:...and for the win, can he be a two-time champion?
Matt Shively: One.
Ashley Argota: OK, I'm gonna sit down now. [Promptly sits down and braces herself]
Jeff: [shortly after Matt wins, as Ashley guessed] Ashley, you're already in position, you played a great game...
Ashley Argota: [In sync with Jeff] Yes, yes, I get it! Just get me out of here! GET ME OUT ALREADY!