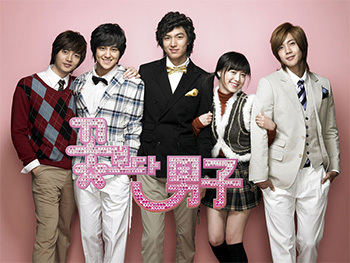 Boys Before Flowers is a Korean Series created in 2009, based on the Japanese manga Boys over Flowers. The live Adaptation Distillation uses similar characters but with different names and outcomes over the course of a 25-episode arc. It is the fifth adaptation of the original source, and it is the only Korean-produced adaptation.

After saving a rich kid from suicide, Geum Jan Di is invited to go to Shin Hwa Academy, a kindergarten through University campus set up strictly for the rich and beautiful. There she gets bullied by F4, a foursome of bored rich upperclassmen who rule the school. After standing up to their leader, Goo Jun Pyo, her life becomes a Love Dodecahedron as some of the members become attracted to her.