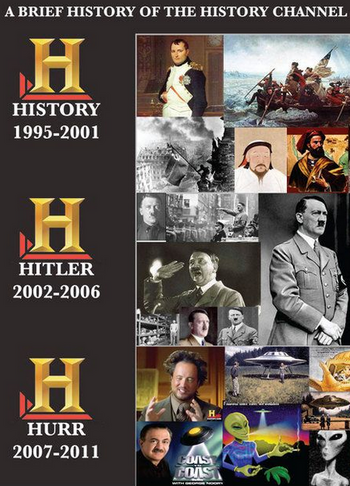 "I'm not saying it was aliens behind the History Channel's decay... but it was aliens."
"You asked for it, you got it! An entire 48-hour marathon of Ghost Harassers on the Used to Be About History Channel!"
— Gravity Falls, "Northwestern Mansion Mystery"
Advertisement:

Many cable channels are created to fulfill a specific programming niche, and their name is Exactly What It Says on the Tin — the Golf Channel shows golf, the Game Show Network shows Game Shows, and so on.

Some channels, however, are not as wedded to their original concept as others. Meddling executives look at the demographics to whom their channel appeals and decide that, hey, since the people watching their Speculative Fiction channel are mostly males aged 18 to 31, and Professional Wrestling is hot among that demographic, surely no one would mind if they started showing pro-wrestling!

The fans of the original programming will mind, of course, but the channel tends to keep going regardless. This may show up with only a couple of odd programs in the schedule, but far too often, given enough time, a channel will have pretty much abandoned its original concept. Whether or not the former invariably leads to the latter is a subject for debate.

Since the network is strongly impacted by the ratings, and the highest ratings go to generally the same few demographics, this tends to lead to networks becoming more and more like each other, either in similar programming or outright airing the same shows.

Some changes can be chalked up to the changing landscape of TV. As the number of channels goes up, networks re-align themselves to try and hold some of their market. That, or the parent companies who might own seven or more cable channels each shuffle stuff for "synergy" or to reduce redundancy. Competition with new media is prevalent as well — classic reruns give way to DVD box sets, On-Demand channels, (and the real killer, Netflix and similar streaming services), music-video channels give way to YouTube and iPods, and info-dumping all-text channels give way to the data display in a digital cable box, smartphone apps (once again, the real killer) or some new-fangled webernet site. Other times, it's just shifting to whatever the network feels will attract the biggest audience — and the audience that lets them charge the most for ads (especially the lucrative young adult demographic, needless to say).

Depending on the network and how the decay is carried out, changing concepts can be either good or bad for the channel. If the Network Decay works out, it may expose the channel to thousands, if not millions of new viewers, who would normally never watch the network in the first place. Or perhaps the earlier direction just was not working out and the network made changes in order to get better and more profitable programming. Furthermore, there are several good shows floating around in Development Hell that wouldn't stand a chance of getting picked up unless a network decides to spread its wings. If the decay doesn't work out, however, then it can create a Broken Base among the channel's viewers, and can throw the network into an Audience-Alienating Era. Even if the decay works, the expanded viewership would come for naught for the various programs now squeezed out of the network's scheduling - once again, pointing out that good and bad can come of it, depending on the viewer.

See Magazine Decay for the print equivalent. See also Artifact Title, They Changed It, Now It Sucks!, Screwed by the Network, and Adored by the Network. Public Medium Ignorance may be a cause for some of the listed networks. If the network decays so much that it's renamed to fit the new focus, then the older network no longer exists and it's a case of Network Death. If it starts overlapping with politics, then it can cross over into Strawman News Media.

Has nothing to do with frayed Ethernet cables or malfunctioning routers.

Say, wasn't TV Tropes only about television before? Hell, doesn't ANYONE talk about idioms in here anymore?!