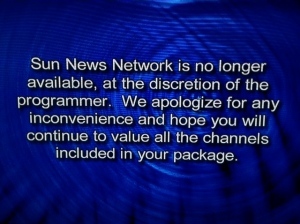 A rare case of the network dying so abruptly, the cable provider has to tell you.
Network Death is when a TV or radio channel ceases to exist. Usually this is either caused by financial troubles forcing it to go off the air or extreme cases of Network Decay and/or Executive Meddling leading to it being "rebranded" as a completely different channel.
Advertisement:

In some cases, two weaker networks are "merged" into one, meaning, one network absorbs the programming and other elements of the other. There's no guarantee that this strategy will work, however, as there are cases when even new channels that aren't rebrands never get very far off the ground, especially in a modern digital cable/satellite world that has to contend with cord-cutters and niche streaming services.

At the end of the day, unless the new network is able to find an audience with its programming, it won't be able to generate any ratings, which leads to low revenue.

When a network is shut down without a rebrand, it's almost certain any show being carried on that network will die with it. In some cases, though, a show will prove successful enough to outlive its former network and manage a last-second Channel Hop, usually a result of the show's rights being sold to another network.

This trope is related to, but not the same as, Network Decay. As noted above, Network Decay can lead to Network Death, but the channel must be given a different name and focus, keeping only its slot on the cable listings.

When this happens to an individual show, it's called Cancellation. When a dying network decides to do something to commemorate its end with a bang, it's a Network Finale.