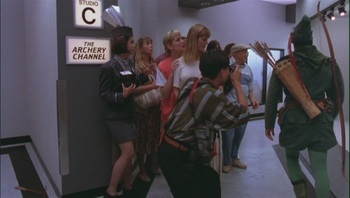 A simple Show Within a Show gag. With the sheer number of television stations available in this day and age, a channel that only has programming which relates to a single hobby or niche can be viable. Think "The Golf Channel" or "Soapnet" for real life examples of this. Naturally, these niche' networks aren't all that appealing to people who aren't interested in the networks' subject matter. (Because of this, they are susceptible to Network Decay, if their original incarnation is not giving them high enough Ratings to keep up with the cost of staying on the air.) Some shows like to exaggerate how uninteresting these channels are to non-hobbyists. They do this by having a character turn to a channel that only runs programming about an unbelievably inane subject 24 hours a day.

The gag works because the channel is boring in two different ways. Even if you somehow manage to find the boring subject matter intriguing, the channel is implied to be repetitive ("We're all X, all the time" or "X, 24 hours a day.). As if that wasn't enough boredom, some shows add to this gag by having an extremely bored sounding man narrate the channel's programming in a bland monotone.

To put it simply, a show you're watching makes up a TV channel. If the gag works, you'll be asking yourself one question about that channel. "Who would watch that boring crap?"