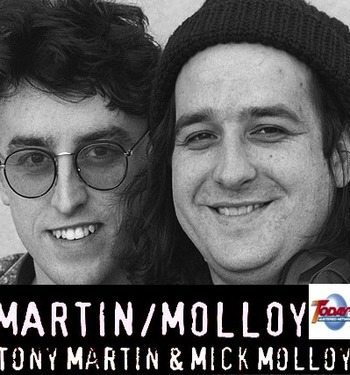 Martin/Molloy was an Australian radio programme starring Tony Martin and Mick Molloy, both formerly of The D-Generation and The Late Show (1992). It was broadcast nationwide on 54 radio stations for two hours on weekday evenings between 1995 and 1998.

The programme was known for its wit and satire, but also, as both performers constantly admitted, a large degree of Toilet Humour. The use of such low-brow comedy was frequently mocked by the hosts themselves. Much of the show consisted of banter between Martin and Molloy, interspersed with music and sketches. These sketches frequently lampooned celebrities, with impersonations provided by Martin. The show's announcer, Pete Smith regularly participated in sketches.

The pair would also interview celebrities, often bringing the guests to fits of laughter. Samuel L. Jackson was declared their favourite guest.

Tropes? What's all that about?