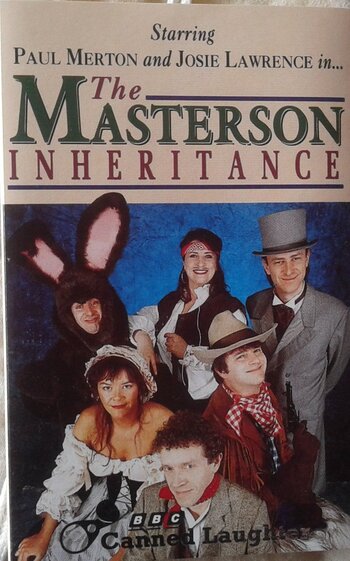 "Good evening, ladies and gentlemen, and welcome to the first in a series of The Masterson Inheritance — an improvised historical saga of a family at war with itself. Over the next half-hour you will hear a team of performers attempt to spontaneously dramatise the first chapter from the chronicles of the Masterson family, based entirely on the suggestions of our studio audience. No script, no rehearsals, just an audience and a couple of microphones."
Advertisement:

The Masterson Inheritance was a BBC radio show which mixed improvisational comedy in the style of Whose Line Is It Anyway? with a parody of Generational Sagas. Each half-hour episode would see the cast (Josie Lawrence, Paul Merton, Phelim McDermott, Caroline Quentin, Lee Simpson and Jim Sweeney, several of whom were already regular or semi-regular players on the UK version of Whose Line) be given a particular historical setting and, incorporating suggestions from the audience, improvise a new chapter in the saga of the irrepressible Masterson clan. One of them, usually Lee Simpson, would act as Narrator and keep the plot running, while the rest would play the various characters that appeared, always ending up with multiple roles.

The show lasted for three seasons, from 1993-1995, with two Christmas specials and one unaired episode (which is available, unedited, from Jim Sweeney's website