Radio / The Museum of Everything 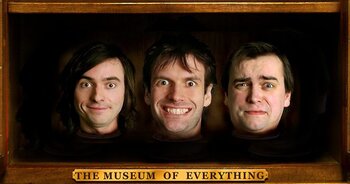 The Museum of Everything is a Radio 4 comedy series, written by and starring Marcus Brigstocke, Danny Robins and Dan Tetsell, broadcast between 2003 and 2006. The series is essentially a sketch-show, with various recurring characters and surreal scenes linked together by the concept of a museum that contains literally everything.