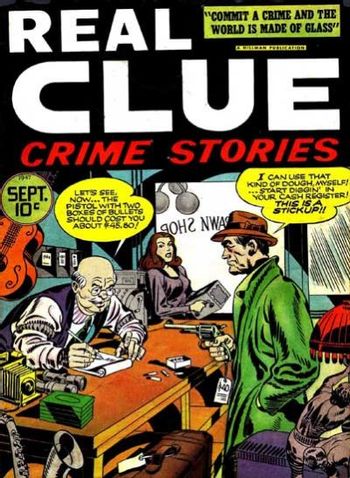 A villain enters a gun store and shows interest in various firearms. The clerk eagerly shows the potential customer every piece he is interested in. The villain picks up one of the guns, examines it and loads it with ammunition provided by the clerk. He then calmly shoots the clerk, collects the guns and ammo and leaves the store.

Decidedly not Truth in Television. For one, you're relying on the dealer to allow you to load the weapon in front of him, and the dealers already know these stories themselves. Anyone who does try to load a weapon in a gun store outside of a shooting range will likely find the dealers and any customers will act more quickly than he will. ("Here's one I prepared earlier...")

Even if you bring your own weaponry, well — you're still robbing the one type of store in the entire world where the clerk is guaranteed to have access to firearms and know how they work. If you pay attention when entering a gun store, you'll see that more often than not the clerk will have a holstered pistol on his belt. Remember, the typical reason that somebody chooses to work at a gun store instead of some other retail sales job is that they like guns, and probably spend as much or more time on the shooting range as the average police officer.note Which is helped by the fact that many gun stores have their own in-house pistol ranges. Needless to say, in most real life stories the idiot robber gets nothing more for his trouble than a Darwin Award nomination, right up there with trying to rob a police officers' convention. (Or a donut shop.)

This term is sort of the ultimate extension of the Five-Finger Discount. Averting this trope is the cause for Shoplift and Die.