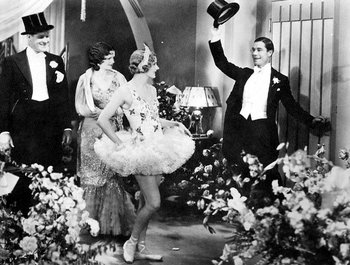 The plot: Sally (Miller) is a waitress who is very bad at her job. She wants to be a dancer. The diner she is working in at the beginning has a window which gives a view of the kitchen and greater diner from the outside, and she has an admirer standing on the sidewalk just to watch her. She almost gets a job from a low-class talent agent Otis Humperdink, but loses both the opportunity and her waitressing job when she dumps his and his girlfriend's order on top of them.

Sally's admirer is a very rich man, Mr. Blair Ferris (Gray), who is already engaged to someone else. He fell in love at first sight. His fiancee seems to understand the situation even if she isn't yet in a I Want My Beloved to Be Happy mood; her mom most definitely does not, since this marriage is supposed to unite two of the finest families on Long Island.

Cut to a fancy restaurant. It employs the exiled Duke Constantine of Czechoslovenia (which has got to be one of the worst fictional country names ever), Connie for short, played by Joe E. Brown. Now it employs Sally as a busgirl. Mr. Ferris is planning on holding a series of bachelor parties at this restaurant; he meets Sally as she is preparing the only table left that seats eight, and helps her do it. She tells him her life's story — her full name is Sally Bowling Green, she is an orphan (her last name came from the phone exchange she was left at), she has been working restaurant jobs for as long as she's been working, and she really wants to be a dancer. She further wins the sympathy of Mr. Ferris, but also avoids doing real work for a significant period of time. Fortunately, the owner of this restaurant already, if unhappily, has a high tolerance for incompetence because he, as an emigrant from Czechoslovenia, already employs an incompetent.

The restaurant does include dancing, both on a ballroom floor and on a stage, and so Sally has a chance to get a shot there. And the great noblewoman and dancer Madame Noskerova, who was booked to appear at the engagement party for Mr. Ferris, is unable to appear, so Otis Humperdink has to get a replacement who can pass for her. Guess who he picks?

This film nearly became a Missing Episode. It was originally filmed in two-strip Technicolor, but only one color sequence still exists — most of the "Wild Wild Rose" number and a snatch of Connie after that — and some of that sequence appears to be missing the green strip. The rest of it exists in black and white, making it possible for us to see the film, and the sound remains intact. Its importance is more as a historical curiosity — there aren't that many pre-Hays Code musicals out there, even ones as innocent as this — than as a work of art.