Film / Three on a Match 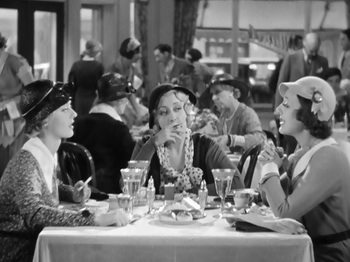 The film starts out with Mary, Vivian, and Ruth (Blondell, Dvorak, and Davis) as young schoolmates at a New York public school. Mary is established as the rebellious one, while Vivian is the most popular and Ruth is the most studious. Some time skips show that Ruth went to secretarial school while Mary went to reform school after getting arrested for larceny.

Time skip again to the present day, and the old schoolfriends are getting back together after a chance encounter between Mary and Vivian at the beauty parlor. Mary has avoided any further brushes with the law and is struggling to make it as a showgirl. Ruth is working as a secretary. Vivian hit the financial jackpot, marrying wealthy lawyer Robert Kirkwood (William). However, Vivian is dissatisfied with her life, emotionally distant from her husband, and generally uninterested in looking after their preschooler son, Robert Jr. When Vivian meets handsome, roguish Michael Loftus, she makes a precipitous decision to abandon her marriage, a decision that leads to tragedy—but new love for Mary.

Humphrey Bogart, several years away from becoming an A-list star, has a supporting part as Harve, one of the gangsters. Not to be confused with the TV game show, Three on a Match.