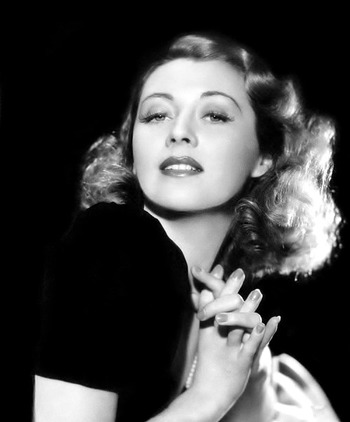 Joan Blondell (born Rose Joan Blondell; August 30, 1906 – December 25, 1979) was an American actor from The Golden Age of Hollywood, famous for her street-wise deadpan snarker characters and her sultry sexiness. Her most famous roles came in The Pre-Code Era when she worked for Warner Bros., perfectly fitting their house style of realism. She made nearly 40 films between 1930 and 1934 alone.

Born into a vaudeville family, she worked on the road and grew a love for acting. At the age of 24, together with fellow native New Yorker James Cagney, she was discovered by Al Jolson. He bought the play they were working on, Penny Arcade, and sold it to Warner Bros. with the caveat that both Cagney and Blondell star in the film. That film didn't make much of a splash, but Cagney grew to greater heights with classics of The Pre-Code Era while Blondell never quite reached stardom even with all her winning qualities. Even so, they starred in seven films together and maintained a close friendship throughout the years.

She was a Busby Berkeley regular, appearing in several of his famous song and dance films and is immortalized for her musical number in the “Remember My Forgotten Man” sequence from Gold Diggers of 1933. In most of her pre-code films, she solidified her screen persona that wasn’t all that different from real life: down-to-earth, tough, and honest.

With The Hays Code crackdown, there came a decline for many actors who reveled in the pre-code sauciness. Blondell was one of the victims and starred in lackluster roles thereafter, never recreating the fun of her pre-codes. She still managed to lead the life of a respectable character actor with parts in films and on the stage. There are still some post-pre-Code highlights that include Nightmare Alley (1947), A Tree Grows in Brooklyn, Desk Set, and The Blue Veil. In the latter, she was nominated for an Academy Award for her supporting role, her only Oscar nomination.