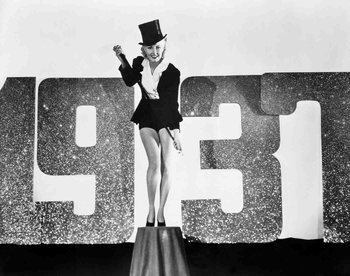 Another year, another gold digger.
Gold Diggers of 1937 (1936) is a Lloyd Bacon film with musical numbers directed by Busby Berkeley.
Advertisement:

Two showgirls, Genevieve (Glenda Farrell) and Norma (Joan Blondell) are out of work and penniless. Genevieve gold digs the business partners, Morty and Tom, of stage-musical producer, J.J. Hobart (Victor Moore), a nervous man in bad health. Norma, on the other hand, becomes the secretary for lazy, if eager, insurance salesman, Rosmer Peak (Dick Powell). Unbeknownst to Hobart, his business partners have ruined his finances and need money quick. Genevieve comes up with the idea to insure Hobart for a million-dollar policy and to cross their fingers that he kicks the bucket soon. She then phones up Norma who gets Rosmer to give Hobart the policy plan. Neither Norma or Rosmer know about the scheme, so they both try to keep Hobart in good health to have the policy pay for their upcoming marriage.

As per usual, wacky hijinks ensue and a couple of intricate dance numbers, too.