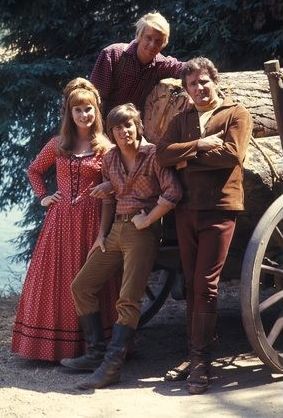 Clockwise from top note David Soul as Joshua Bolt, Robert Brown as Jason Bolt, Bobby Sherman as Jeremy Bolt, and Bridget Hanley as Candy Pruitt.
Here Come the Brides is an American Western that aired for two seasons on ABC from 1968 to 1970.
Advertisement:

In the small frontier town of Seattle, lonely lumberjacks threaten to leave the area due to the lack of women. To save his business, logging company boss Jason Bolt (Robert Brown) promises to bring 100 marriageable women to the town and get them to stay for a year. Sawmill owner Aaron Stempel (Mark Lenard) pays for the women's journey as a wager - if the women leave Seattle within the year, Stempel wins Bridal Veil Mountain, home of the Bolt logging company. Jason and his brothers Joshua (David Soul) and Jeremy (Bobby Sherman) recruit the women from Massachusetts and work to keep them in Seattle, despite Stempel's efforts to sabotage the deal.