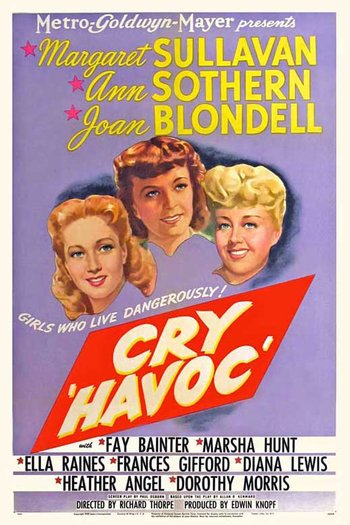 "This is the story of thirteen women."
Advertisement:

It is set in 1942 on the Bataan peninsula in the Philippines. As the film opens the situation is already bad, with the U.S. Army having been forced into Bataan as a last redoubt after the Japanese have conquered the rest of Luzon. Lt. Mary Smith (Sullavan), a supervisory nurse at an Army field hospital, is desperate for help. At the behest of her commander Capt. Alice Marsh (Fay Bainter), "Smitty" looks for volunteers with first aid experience among the civilians trapped on Bataan by the Japanese attack. She gets nine volunteers, including sassy, backtalking Pat (Sothern) and a stripper, Grace (Blondell). The women are initially catty towards each other, but the very serious and rapidly deteriorating situation on Bataan, and the stress they go through as hospital volunteers, cause them to form bonds. They also learn to respect the strict and serious Smitty, who has a couple of secrets.

Robert Mitchum, just starting out in Hollywood, plays a dying American soldier, and has one line.

Compare So Proudly We Hail!, another film also made in 1943 and also about Army nurses on Bataan.