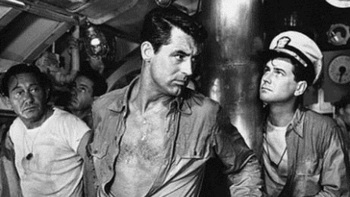 Destination Tokyo is a 1943 American wartime propaganda film directed by Delmer Daves—it was his directorial debut.

It involves the fictional mission of of a fictional submarine, the USS Copperfin, in the Pacific theater of World War II. The Copperfin, led by Captain Cassidy (Cary Grant), leaves San Francisco on Christmas Eve 1941 on a secret mission. After 24 hours at sea Cassidy unseals his orders and gets a surprise: his ship is to go all the way to Tokyo Bay. The extremely hazardous mission requires that Cassidy somehow enter Tokyo harbor without being observed, and then land a shore party which will perform reconnaissance for an upcoming carrier-based bombing raid on Japan. (Namely, the Doolittle Raid

, dramatized in Thirty Seconds Over Tokyo.)

Cassidy swings by the Aleutians to pick up one Lt. Raymond, who speaks Japanese and is to lead the shore mission. Their hazardous mission is made even more eventful when a young seaman falls ill and requires an emergency appendectomy. The Copperfin does eventually manage to sneak into the bay, but getting out will be no easier than getting in.