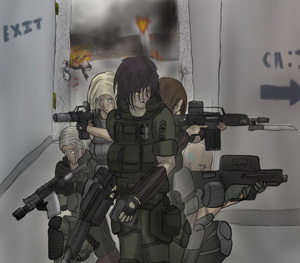 "Now rise Karcharoth, rise and be the monster you were made to be, rise and CRY HAVOC."
— Big Red Wolf thingy
Advertisement:

Cry Havoc is a fantasy webcomic that follows the fortunes of four dogs of war who are bitten by a werewolf. Chased by the forces of the Vatican and Aesir churches, they try to survive in a world on the brink of collapse.