Film / So Proudly We Hail! 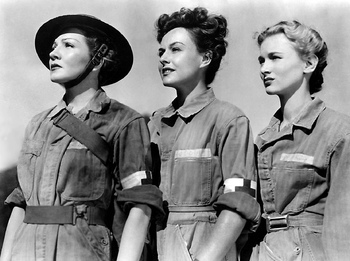 It follows several U.S. military nurses, including Lt. Janet "Davy" Davidson (Colbert), Lt. Joan O’Doul (Goddard), and Lt. Olivia D'Arcy (Lake), as they survive or die alongside the soldiers they bravely try to ease out of pain or help to die as peacefully as possible.

The nurses begin their service by heading to Hawaii; that trip is circumvented by the surprise Japanese attack on that fateful day in December 1941. Soon afterward, the women are rerouted to the Philippines, where they witness the horrors of war in the Pacific Theatre.

Compare Cry 'Havoc', another 1943 film about American military nurses involved in the doomed defense of Bataan.