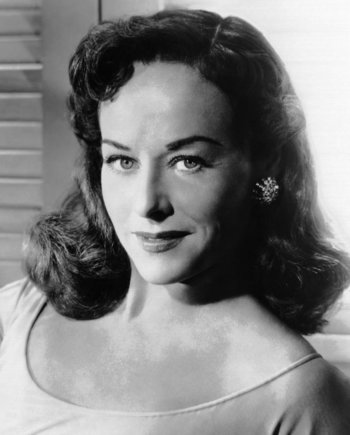 "Actors and actresses who say they never go to see their own pictures are talking through their hats. You don't have to be a Freud to know that the most fascinating person in the world — actors or anybody — is yourself."
Advertisement:

Paulette Goddard, born as Marion Levy (June 3, 1910 – April 23, 1990) was an American actress and dancer that was in many films during The Golden Age of Hollywood.

Often making background appearances and cameos, she's most known for her starring roles in the Charlie Chaplin movies Modern Times and The Great Dictator, even though her most successful film was 1945's Kitty. She was also nominated for a Best Supporting Actress Oscar for the World War II drama So Proudly We Hail! but didn't win.

Other things that Goddard is known for is being one of Fred Astaire's dance partners, her marriages to the aforementioned Charlie Chaplin and Burgess Meredith, and her musical number (along with Veronica Lake and Dorothy Lamour) in the musical Star Spangled Rhythm. She was also in the final runnings for the role of Scarlett O'Hara in Gone with the Wind and was devastated when she lost to Vivien Leigh.

Goddard's acting career began on stage in many Ziegfeld Follies as a dancer. When she arrived in Hollywood in 1929, she started appearing as extras in MGM films, you might have noticed her in the background of some Laurel and Hardy films. It wasn't until Modern Times that Goddard got lead roles in films. She also was a radio star that featured in a couple of radio shows, often adaptations of movies.

She retired from acting after almost 50 years, devoting the rest of her life to her art collection and being a socialite at many high-profile events, usually wearing a lot of jewelry.