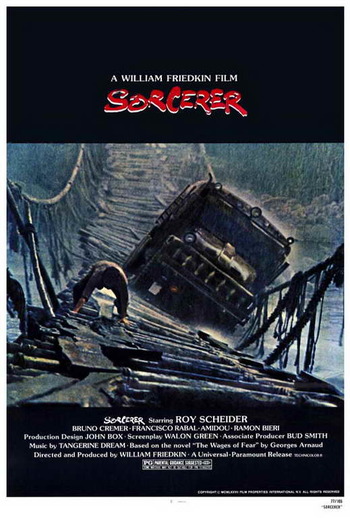 Four wanted men from around the world escape to the oil fields of the South American jungle, evading pursuit by the authorities for their various crimes. While in hiding, they are chosen to take on a job that may result in their gruesome deaths or a handsome reward: delivering large quantities of Nitroglycerin to an out of control oil well 218 miles north. Their journey becomes a tale of survival, daring odds, and overcoming personal differences. With two trucks built from mothballed rustbuckets which have seen better days, William Friedkin's Sorcerer is a film not about magic but about metaphysical wonder.

Made in 1977, based on the 1953 The Wages of Fear, itself adapted from Georges Arnaud's Le Salaire de la Peur, Sorcerer boasts a famed international cast featuring Roy Scheider, Bruno Cremer, Francisco Rabal, and Amidou.

One of the last films of The New Hollywood era. After the successes of The French Connection and The Exorcist, William Friedkin had originally conceived Sorcerer as a side project alongside the scrapped The Devil's Triangle, soon having its resources integrated in making the former film. With extensive shooting in the Dominican Republic among other locations, the project ran over its intended $15M budget. It also had the misfortune of being released more or less concurrently with the juggernaut that was Star Wars (to which its theatrical trailer was attached in its initial release), which — along with less-than-stellar critical reviews — doomed it to box office failure, although it has become something of a Cult Classic in subsequent decades, and contemporary critical reception has since massively improved.

For the Gilbert and Sullivan comic opera, see The Sorcerer.