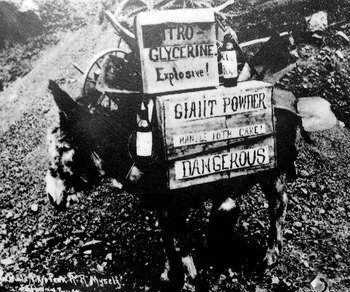 This looks safe!
"This is NOT! THE WAY! YOU TRANSPORT! NITROOO!!!"
— Jim West, Wild Wild West
Advertisement:

Nitroglycerine is an unstable substance, prone to explode at the first serious physical shock, and handling it is a nerve-wracking experience. What better way to ramp up the tension level in a story than to have the protagonists be forced to transport some a long distance through a hostile environment?

This trope describes a plot where the heroes are required to move nitroglycerine (or some other unstable, highly explosive substance) across bad terrain (rough ground, winding roads, etc.). A common substitute is dynamite — while the whole point of it is that it's much more stable, it has a narratively convenient downside of "sweating" nitroglycerine after long periods of storage.