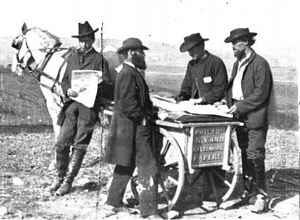 Extra! Extra! Read All About It!

Newspapers as we know them first appeared in the 17th century, some time after the printing press was invented, although other methods of written news had been around for longer. Up until the second half of the 20th century, it was the dominant means of communication before the advent of television with many publications for almost every metropolitan area (some of them evening papers). Since the 1990s however, newspapers and print media in general have been struggling due to diminishing interest with the consolidation of 24-hour-news cable channels and radio formats, as well as the arrival of The Internet, and the beginning of the 21st century has seen many publications shutting down.

Most newspapers focus on general information; namely local, national and world news. Also common are sections dedicated to financial and sports news, gossip and comic strips and puzzles. However, there are notorious differences in the amount of given information: The New York Times focuses on international informations, while The Washington Post dabbles in U.S. politics. On the other side, papers such as The Sun emphasise crime and celebrity news. Publications are also differentiated by their political slant, either conservative or liberal. "Weekend" editions (primarily those published on Sunday) are usually bigger and more extensive in information terms, often running special sections not published on weekdays, such as color magazines.

Other papers focus just on one kind of news, most notably financial publications such as The Wall Street Journal and Financial Times. Sports papers are also the most popular in continental Europe. And local newspapers outside the U.S., Canada and Australia will most likely feature local events solely.

The perceived blandness and banality of mainstream newspapers in general has given rise since the 1970s to alternative weeklies, which tend to focus on investigative journalism and pieces deemed too provocative for regular publications. Rolling Stone and Village Voice (actually founded in 1955) were part of the first wave of the "underground press".

Newspapers Around The World:

German publication Relation aller Fürnemmen und gedenckwürdigen Historien, first published in 1605, is recognised as the earliest newspaper. Nowadays, newspapers are divided between stolid upmarket publications distributed nationally and sensationalist "boulevard" papers sold in metropolitan areas (the term "tabloid" is not often used as some "boulevards" are printed in other formats)

Spanish press has been greatly influenced by the atmosphere of the Franco era and the Bourbon restoration, with the general press being dominated by national publications and sports papers compensating the absence of a "popular press".
Latin America

The vast majority of the Argentine press is produced in Buenos Aires, and is dominated by La Nación and Clarín, surrounded by a few left-wing newspapers (Página 12 and Tiempo Argentino) and some populist publications (Crónica and sports paper Olé) aside from a number of local publications.

The Chilean newspaper industry is dominated by El Mercurio and La Tercera note Being originally the third daily edition of the defunct newspaper La Hora. Both are notoriously right-wing (the former being more conservative, while the latter is —slightly— more liberal). However, with Chile veering to the center-left (given the country's recent history), readership is not too high. Anyways, the few politically-independent dailies since the 1990s have been short-lived, with the exception of free paper Publimetro (part of Metro International). Other publications: There are four freesheets published in the country: three with general information (Publimetro, La Hora and hoyxhoy) and one dedicated to sports (El Gráfico). Most cities have daily newspapers, most notably El Mercurio de Valparaíso, the oldest Spanish-language publication still in print. In recent years, alternative weeklies have sprung up, usually with a left-wing slant, the first of them being The Clinic (Chile's answer to Private Eye, and yes... the title is in English), notorious for its deliberately provocative front pages and investigative journalism.

The Aztec country is a prime example of the low readership rates in Latin America, with the joint circulation of Mexico City's newspapers (about a dozen) being smaller than the one of the San Diego Union-Tribune (a metropolitan area almost ten times smaller than of Mexico's capital). Prominent newspapers include El Universal, Excelsior, Reforma (upmarket), La Jornada, La Prensa, El Sol (downmarket), Récord, Estadio and ESTO (sports).

The Peruvian newspaper market is actually one of the biggest in the world, but mostly because of the so-called "prensa chicha", with a dozen newspapers that follow said pattern. The term refers to a popular-oriented style of journalism that would make The Sunday Sport or the New York Post respectable organizationsnote Chicha is a beverage found in Peruvian working-class neighborhoods. And to boot, these were financed by Alberto Fujimori for his 2000 re-election (and supposedly still maintained by his intimate circle after his downfall). More mainstream newspapers include El Comercio and La República.