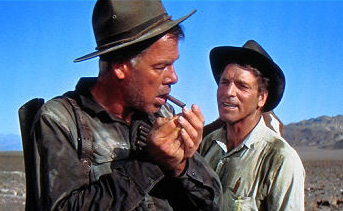 The Professionals is a 1966 American Western starring Burt Lancaster, Lee Marvin, Robert Ryan, Woody Strode, and Claudia Cardinale. The supporting cast includes Jack Palance and Ralph Bellamy and the film was written and directed by Richard Brooks, whose screenplay was based upon the novel A Mule for the Marquesa by Frank O'Rourke.

In the latter period of The Mexican Revolution, Rancher J.W. Grant (Bellamy) hires four men, who are all experts in their respective fields, to rescue his kidnapped wife, Maria (Cardinale) from Jesus Raza (Palance), a former Mexican Revolutionary leader turned bandit.

Team leader Henry "Rico" Fardan (Marvin) is a weapons specialist, Bill Dolworth (Lancaster) is an explosives expert, the horse wrangler is Hans Ehrengard (Ryan) and Jake Sharp (Strode) is a scout with traditional Apache skills, particularly with a bow and arrow. Fardan and Dolworth, having both fought under the command of Pancho Villa, have a high regard for Raza as a soldier. But they are hard and cynical professionals so they have no qualms about killing him now.

However, once they get across the border they discover that all is not at it seems to be.

The Professionals provides examples of: