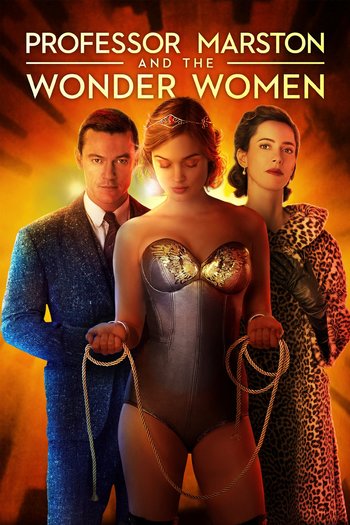 "I wonder if you're the one with a secret identity."
Advertisement:

Professor Marston and the Wonder Women is a 2017 Romantic Drama Biopic written and directed by Angela Robinson (D.E.B.S.) and distributed by Annapurna Pictures.

The film is based on the lives of polygraph inventor Dr. William Moulton Marston (Luke Evans), his wife Elizabeth Holloway Marston (Rebecca Hall), and their domestic partner Olive Byrne (Bella Heathcote) as they each contributed to the creation of an iconic superheroine, Wonder Woman. Connie Britton and Oliver Platt also star.

was shown before some screenings of the live-action Wonder Woman film during its opening weekend and was then released on YouTube on June 5th, 2017, along with an interactive flash webcomic

(no, not that Flash) featuring illustrations of Evans, Hall, and Heathcote in-character as the Marstons and Byrne, respectively.

Not to be confused with Wonder Women.

Professor Marston and the Wonder Women contains examples of the following tropes: