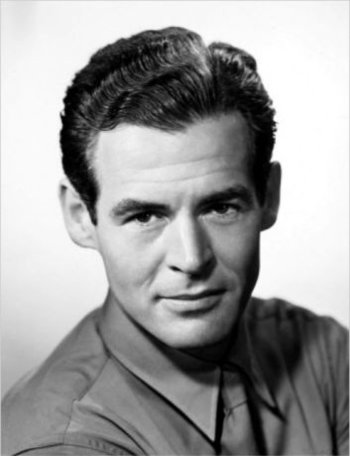 Robert Bushnell Ryan (November 11, 1909 – July 11, 1973) was an American actor from The Golden Age of Hollywood, known for his menacing and intense presence in a variety of roles.

Ryan began his acting career in 1940 with Paramount, however, his career didn't take off. In 1944, he signed a contract with RKO who would make him famous. His imposing height (he was 6’4) and rough looks made him a regular anti-hero or downright villain in many films. Crossfire was his Star-Making Role and would set the tone for his villainous characters to come. It was also the only film where he was nominated for an Academy Award for Best Supporting Actor. Some departures from his rough and tumble guys include the films On Dangerous Ground, King of Kings, and The Set-Up.

While he was the go-to bad guy for many a Western or Film Noir, Ryan was a real-life pacifist (although he did serve as a drill instructor for the U.S. Marines during World War II), was vocal about racial equality, and was strongly against the HUAC and their blacklist. While he never was a huge star, Ryan's career spanned over 30 years, and he worked with the best directors of the day including Nicholas Ray, Samuel Fuller, and Anthony Mann. The film critic David Thomson said that Ryan was an unusual actor in that he was "truly frightening": he was never afraid of playing someone completely unsympathetic.

He died of lung cancer in 1973, acting right to the end of his life.