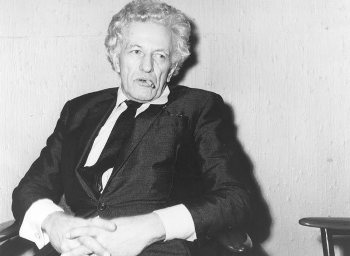 Nicholas Ray (August 7, 1911 – June 16, 1979) is the original cult director. With one solid exception, his films never became box-office hits and he never attained the fame or cultural and institutional appeal of John Ford, Alfred Hitchcock, Elia Kazan or Billy Wilder. His films were more popular among a circle of admirers in France, Europe and independent-minded young adults. He made films in all kinds of genres, including Film Noir, The Western, The Musical and Epic Movie but created a distinct visual style and tone that made him one-of-a-kind.

Oh and that one exception! That was Rebel Without a Cause starring James Dean. You may remember the final shot, a man walking up to the Observatory with a briefcase, that was the director himself. In his lifetime, he worked with the likes of Farley Granger, Robert Ryan, Robert Mitchum, Humphrey Bogart, James Mason, Christopher Plummer, Burl Ives, Sterling Hayden, Joan Crawford in addition to the cast of Rebel. As critic Robin Wood remarked, "no one gives a bad performance in a Ray film."

He was also noted for a messy, turbulent personal life not unlike that of his characters. Already being an erratic student prone to alcoholism, his drinking and drug problems only worsened as his career progressed, culminating in him collapsing on the set of 55 Days in Peking, his final Hollywood film. His marriage to Gloria Grahame infamously ended when he discovered her in bed with his 13-year-old son Tony, whom she'd later marry.

Ray's Hollywood career ended with the Fall of the Studio System which led to a long period in Europe. He returned to America at the height of The '60s and was thrilled at seeing a culture heralded by his most famous film. He became a beloved teacher at New York University and SUNY Binghamton, one of his students in the former was Jim Jarmusch, with Ray making his final film, the experimental We Can't Go Home Again with students from the latter that wasn't officially released until 2012. The German director Wim Wenders was another fan and he and Ray collaborated on Lightning Over Water as Ray was on his deathbed, the film becoming finally a documentary about his final days. He's coming back into focus in the 21st Century especially with the popularity of his lesser known titles like In a Lonely Place on DVD.

Important books on Nicholas Ray, include Nicholas Ray: An American Life by Bernard Eisenschitz which is not only considered his definitive biography, but one of the best biographies on any film director, currently in print from the University of Minnesota Press. Other books include, I Was Interrupted, a collection of articles, interviews, and personal notes by Ray during his time as teacher in New York.

Some of the Tropes appearing in Ray's works: