Film / Battle of the Bulge 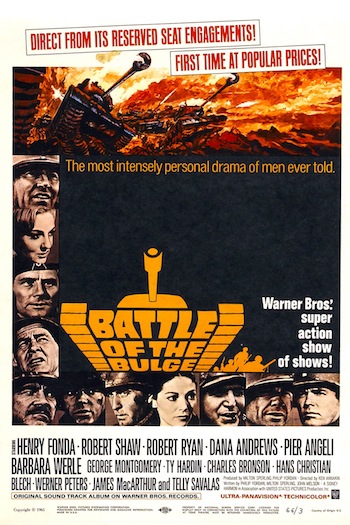 Von Diepel: General Kohler says we are behind schedule. He wants to know what's holding us up.
Col. Martin Hessler: Tell the general the Americans are learning how to retreat.
Advertisement:

Battle of the Bulge is a 1965 epic World War II film about the famous battle of the same name, directed by Ken Annakin.

Henry Fonda plays Lt. Col. Daniel Kiley, a maverick American intelligence officer whose warnings of an impending large-scale German attack are ignored by Army Brass. Robert Shaw plays Col. Martin Hessler, the ruthless commanding officer of a German panzer unit at the front of the attack. Also appearing are Hans Christian Blech as Hessler's orderly Conrad; Charles Bronson as Maj. Wolensky, the commander of a U.S. infantry unit; Telly Savalas as Sgt. Guffy, who leads an Allied tank group; Robert Ryan as Gen. Grey, Kiley's CO who does not heed his warnings about the attack; and Dana Andrews as Col. Pritchard, Grey's assistant.

The feature was filmed in Ultra Panavision 70 and exhibited in 70 mm Cinerama. Unlike most World War II epics, it contains virtually no portrayals of actual senior Allied leaders, civilian or military. This is presumably because of controversies surrounding the battle, both during the war and after. Though Allied forces ultimately won the battle, the initial German counteroffensive caught them by surprise and caused high casualties. The film itself is completely made up, and doesn't really match any of the actual Battle of the Bulge moments in December 1944 though January 1945, with the sole exception of the Malmedy Massacre. None of which prevented the film from being frequently aired on American television, especially in The '70s.

See also Battleground, a 1949 film about the Bulge that at least had snow, as well as possibly the most realistic depiction of the battle, the "Bastogne" episode of HBO's Band of Brothers.