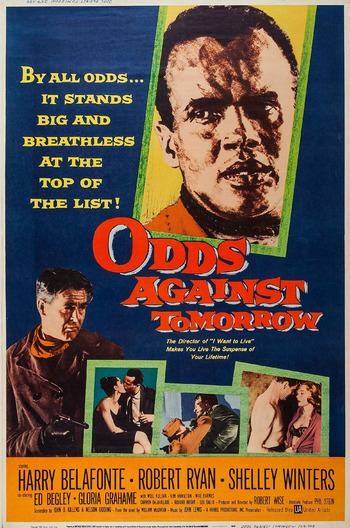 Odds Against Tomorrow is a 1959 Film Noir produced and directed by Robert Wise, starring Harry Belafonte, Robert Ryan, and Ed Begley with Shelley Winters and Gloria Grahame in supporting roles. The film is often acknowledged as one of the very last films to appear in the classic noir cycle, and is notable for a plot which features a heavy dose of commentary on racism.

David Burke (Begley) is an aging, disgraced former cop whose career was destroyed when he refused to cooperate with state crime investigators. To get back into some money, Burke has planned the robbery of a small-town bank in Upstate New York. To assist him with said robbery, he recruits Earl Slater (Ryan), an ill-tempered, racist ex-con from Oklahoma who is being supported — much to his humiliation — by his girlfriend Lorry (Winters); and Johnny Ingram (Belafonte), an impoverished jazz musician and Gambling Addict who doesn't wish to take part in the holdup, but reluctantly agrees to, since his losses at the racetrack have left him deeply — and dangerously — in debt to a mobster. When the trio comes together, Slater is none too happy to discover that he will be working alongside a black man, and the rising racial tensions between him and Ingram soon threaten to derail the criminal enterprise.