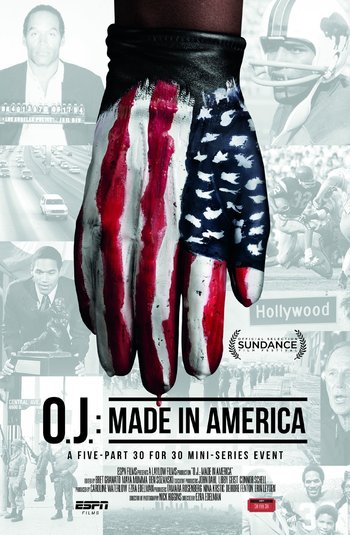 O.J.: Made in America is a 2016 documentary miniseries produced by ESPN.

The five-part miniseries is a documentary of the life of O. J. Simpson, former Heisman Trophy winner, NFL star, commercial pitchman, and character actor (Roots, The Naked Gun), now infamous for allegedly murdering his ex-wife Nicole Brown Simpson and waiter Ron Goldman in 1994. The double murder triggered the "Trial of the Century" in which Simpson was ultimately acquitted, although he was later found civilly liable for wrongful death. The series, while examining the life of O.J. and the murders in particular, also examines the history of race relations in the city of Los Angeles and the tensions between the black community in Los Angeles and the LAPD, factors which contributed to Simpson's acquittal.

The series was directed by Ezra Edelman. Before airing on ESPN, as part of that network's 30 for 30 documentary series, it ran for a week in two theaters (in a three-part format), one in Santa Monica and the other in New York City. This made it eligible for the Oscars and it won the Academy Award for Best Documentary Feature. It set a record for longest "film" to win an Oscar (467 minutes), beating the mark previously set by the 1968 Russian adaptation of War and Peace.note Random trivia: the shortest film to be nominated for an Oscar is animated short Fresh Guacamole.