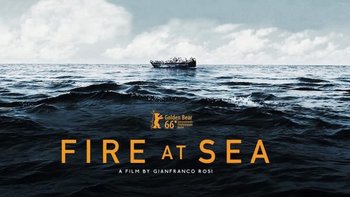 Fire at Sea is a 2016 film from Italy, directed by Gianfranco Rosi.

It is set on Lampedusa Island, a little flyspeck of land belonging to Italy but only 113 km away from the African coast (Tunisia, specifically). Much of the film follows the adventures of a 12-year-old boy named Samuele, who does the kind of things you'd expect a 12-year-old boy on an island to do, like go on his dad's fishing boat or make his own slingshot. Samuele's happy young life is contrasted with something else happening on Lampedusa: namely, the European migrant crisis. Lampedusa, being part of Italy and thus the European Union but also being so close to Africa, is a major entry point for waves of refugees from sub-Saharan Africa. They take to the waters of the Mediterranean Sea on rickety, overloaded boats, making a dangerous journey that often involves either people dying of dehydration or people dying when their boats sink.