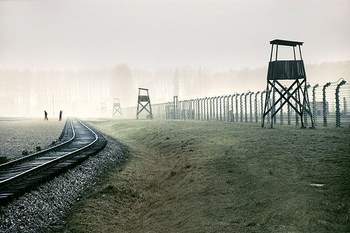 Night and Fog (Nuit et brouillard) is a 1956 is a 32-minutes documentary film from France, directed by Alain Resnais.

It is about The Holocaust, and specifically, the Nazi concentration camps. The film opens with color footage from the 1950s of Auschwitz-Birkenau camp. A narrator comments on the rise of the Nazis and their construction of concentration camps to punish their enemies. (Oddly, the specific use of death camps for the extermination of the Jews is not dwelt upon.) The film examines the operation of concentration camps: the arrival of victims on cattle cars, how they are shaved and tattooed, their horrifying living conditions in wooden barracks, their use as industrial slave laborers. Prisoners are used as victims in ghastly medical experiments; some are used as sex slaves in brothels. Finally, the film moves on to extermination, showing the gas chambers and the crematoria, as well as the goods that were taken from the dead.

The first commercially-released documentary of the Holocaust, and one that proved quite controversial when it was made. The West Germans tried to stop the film from being screened at Cannes. Resnais's own French government demanded that he obscure a shot of a French policeman standing guard over Jews being rounded up at the Vel d'Hiv.