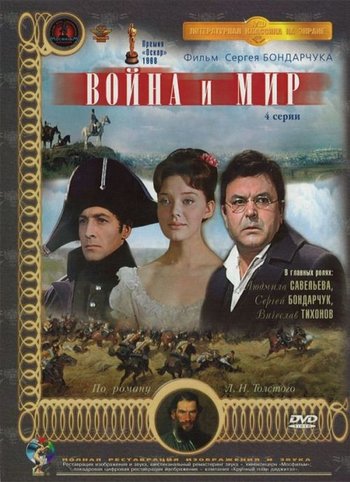 War and Peace is a film series from the Soviet Union, released 1966-67, directed by Sergei Bondarchuk.

It is, of course, an adaptation of the novel War and Peace by Leo Tolstoy. The film opens in 1805 as Pierre Bezhukov (played by Bondarchuk), son of a nobleman, is making the rounds of St. Petersburg high society. While Pierre wants no part of The Napoleonic Wars, his friend Prince Andrei Bolkonsky (Vyacheslav Tikhonov) joins the army, and narrowly escapes death when Napoleon crushes the Russian and Austrians at the battle of Austerlitz

Bolkonsky comes back home after the war and meets Natasha Rostova, daughter of Count Rostov. They fall in love and get engaged. Pierre for his part marries the beautiful Hélène Kuragina, but the marriage is a disaster, and she cheats on him. Natasha strays as well, falling in love with Prince Anatol Kuragin while Bolkonsky is touring Europe. An enraged Bolkonsky breaks off their engagement, only for Pierre, still stuck in his horrible marriage to Hélène, to proclaim his love for Natasha. All of these romantic entanglements are rendered temporarily irrelevant when Napoleon invades Russia in 1812.

War and Peace came ten years after an epic American film adaptation directed by King Vidor (which was screened in the Soviet Union in 1959). The Soviets, miffed at their American Cold War rivals producing a successful adaptation of their story, elected to make one of their own. Mosfilm spared no expense; the film cost nearly 8.3 million rubles, some $70 million in American dollars of fifty years later. The film was made to be even more faithful to the book than the Vidor film, and consequently ran for seven hours and 11 minutes. It was released in Russia in 1966 and 1967 in four separate installments, and was a box-office smash.