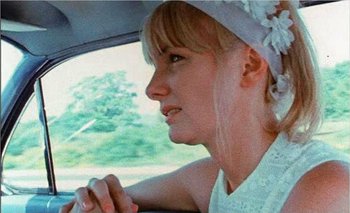 Wanda is a 1971 film written by, directed by, and starring Barbara Loden, who in her spare time was married to Elia Kazan.

Wanda Goransky (Loden) is a dirt-poor woman living in a dirt-poor housing development in southwest Pennsylvania that directly abuts a coal mine. She is beaten down by life, perpetually melancholy, barely literate, unable to get a pathetically low-paying job in a garment factory, sleeping on her sister's couch (and her brother-in-law wants her out). She is late for her own divorce hearing, at which she apathetically agrees to let her husband have custody of their two children.

Things go from bad to worse for Wanda when she wanders into a movie theater and falls asleep, only to wake up and discover that someone stole the very little money in her wallet. Lacking anywhere else to go she wanders into a bar, ignoring the agitated man behind the counter who tells her the bar is closed. It turns out the agitated man is an armed robber, one Norman Dennis. Wanda, lacking any other options in her life, latches on for dear life to the abrasive, abusive "Mr. Dennis", joining him in a life of crime.

Made on a budget of $100,000. The only feature film directed by Loden before her untimely death from breast cancer at the age of 48 in 1980.