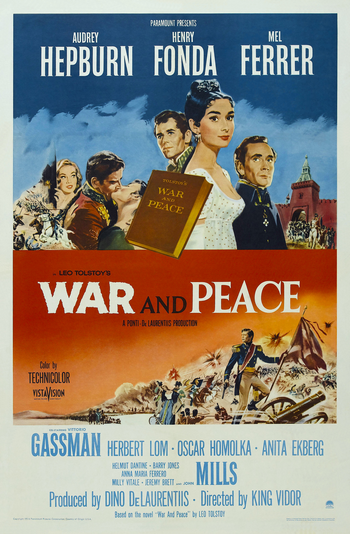 War and Peace is an American 1956 Historical Fiction drama film based on the novel of the same name. It was directed by King Vidor (who also co-wrote) and scored by Nino Rota. It starred Audrey Hepburn as Natasha Rostova, Henry Fonda as Pierre Bezukhov, and Mel Ferrer as Andrei Bolkonsky.

The film, like the book, focuses on several interconnected nobles in 1800s Russia. Pierre Bezukhov, the bastard son of Russia's richest man, inherits his father's fortune and enters an ill-fated marriage with Hélène Kuragina (Anita Ekberg). Andrei Bolkonsky goes off to war to seek his purpose. Nicholas Rostov (Jeremy Brett) goes to war for glory, while his sister Natasha Rostova grows up and falls in love with Andrei, only to be corrupted by Hélène's rakish brother Anatole (Vittorio Gassman). All the while, Napoléon Bonaparte (Herbert Lom) proceeds with his invasion of Russia, threatening the relative stability of the upper class and forcing the characters to grow and mature.

Other actors with roles in the film are Helmut Dantine as Fedor Dolokhov, Anna Maria Ferrero as Marya Bolkonskaya, Oskar Homolka as Mikhail Kutuzov, and John Mills as Platon Karataev. Despite the total runtime of 208 minutes, the film is still a heavily condensed version of its source material.