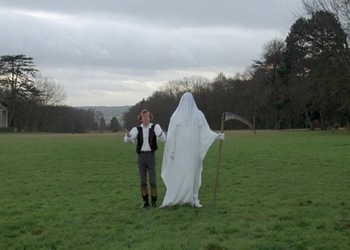 "If it turns out that there is a God, I don't think that He's evil. I think that the worst you can say about Him is that basically He's an underachiever."
Advertisement:

Love and Death is a 1975 Woody Allen comedy film that is an Affectionate Parody of Russian novels, with a particular debt to War and Peace. It's Allen's last totally comedic film before Tom Hanks Syndrome hit, and he considers it one of his favorites of his work.

The film deals with Boris Grushenko (Allen), who like many other Allen protagonists, is a cowardly young man with intellectual pretensions. Grushenko is drafted into the Napoleonic wars and ultimately roped into an assassination attempt on Napoleon.