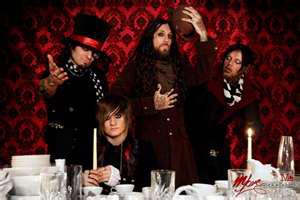 Love and Death is a Christian Nu Metal band formed by former Korn guitarist Brian "Head" Welch. Formerly known simply as Brian "Head" Welch or Head (as it started as a solo project), the band became Love and Death in February of 2012. Coming out of the Head name, the band went through a change from a six piece group becoming a four piece one. The only original Head members were Brian himself, Bassist Michael Valentine, and Drummer Dan Johnson. This left them in need of a new lead guitar player. Brian would find his new guitar player through the auditions of fellow Christian Rock outfit, Thousand Foot Krutch. Head would discover the "perfect fit" in 15 year old guitarist JR Bareis who was auditioning to be Thousand Foot Krutch's new guitarist (via YouTube) but was instead discovered by Head and installed as Love and Death's lead guitarist.

Love and Death were officially formed in February 2012 and released their first EP "Chemicals" on April 24, 2012. This EP included their debut single of the same name, a re-recorded version of Welch's last single "Paralyzed", a cover of "Whip It" by Devo, and remixes of "Chemicals" and "Paralyzed" by Christian Dubstep producer Har Megiddo. Love and Death would release their first full album "Between Here and Lost" on January 22 2013 on Tooth and Nail records. They then released a deluxe edition with a new song "Empty" and two more Dubstep remixes.

Their sound combines elements of Korn's unique sound with heavier, somewhat Metalcore sounding elements (Brian's Metal Scream among them) and some Dubstep/electronic sounds and effects. They have a very low sound, thanks to their downtuned baritone guitars and Valentine's six string bass. Most of their lyrics detail substance abuse (in a case of Write What You Know by Welch) and a lot of Christian elements and Double Meaning metaphors.

Not to be mistaken for Love and Death, a 1975 movie by Woody Allen.

This Band contains examples of the following tropes: