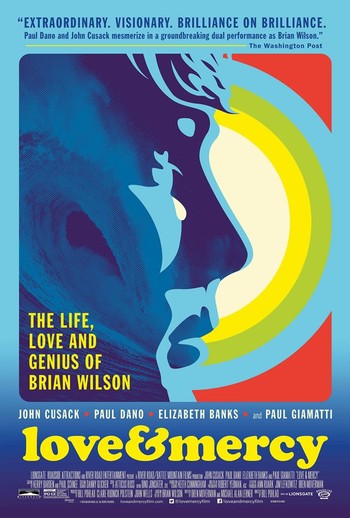 In the mid-1960s, Brian Wilson (Dano) is riding high. As the talented Lead Bassist of The Beach Boys, he enjoys both wealth and success. However, a panic attack on an airplane along with the release of Rubber Soul prompts him to stay in California crafting a more experimental, personal album with no filler, Pet Sounds. However, while crafting the follow-up Smile, Wilson’s mental health takes a downward turn as drugs and stress drive him past the brink of sanity…

In the mid-1980s, Brian Wilson (Cusack) is an Empty Shell controlled by his abusive doctor/legal guardian/svengali Dr. Eugene Landy (Giamatti). Separated from his friends and family, he seems adrift under the watchful eye of Landy until he meets Melinda Ledbetter (Banks), a Cadillac saleswoman who falls in love with Wilson and works to get Landy out of his life.

Confused? Well to put it more succinctly, Love & Mercy jumps back and forth between these two plots in order to tell the story of Brian Wilson's life and music and how they're affected today.