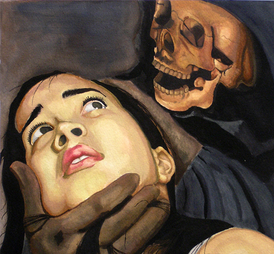 by greenleafstudio
Hudson: Growing old terrifies you, doesn't it?
Xanatos: [somewhat rattled] Nothing terrifies me. Because nothing is beyond my ability to change.
— Gargoyles
Advertisement:

Death comes to all humans, and while most of us don't especially like it, and want to postpone it as much as possible, some people will try to escape that fate at all costs. For them, there is no Fate Worse than Death.

While not wanting to die is a great motivator to spring into action in the short term, some people take that to the extreme, plotting and scheming and searching for ways to hold it off indefinitely, even when the prospect of having to meet the reaper seems reasonably far off. Especially when Your Days Are Numbered. Performing bizarre rituals, which are sometimes nothing more than personal superstitions, extreme paranoia and carefulness, disregard for the lives of others in favor of their own, and a willingness to buy into fantasy or myths that promise to extend their life are all side-effects of having such a phobia. This is often the motivation for an Immortality Seeker.

Why a character may have a Mortality Phobia is strangely not commonly gone into, though when it is, it often has to do with a fear of having to pay for all the bad deeds they've done in the afterlife, or a fear that there isn't one at all. Such characters are generally secular, wealthy, and powerful, so presumably they can't stand the possibility of losing all that and starting over, either.

Another form of this trope is when a character suddenly faces a mortal threat and completely buckles in fear.

A Hollywood Atheist might be accused of this (or play it straight if they're a villain) on the basis that they don't believe in life after death (in reality, atheists report less fear of death on average, though ironically just thinking about them can inspire this in others).

Contrast Mono no Aware, Who Wants to Live Forever?, Not Afraid to Die, Death Seeker, and We All Die Someday. For fear of someone else's death, you'd like to see Protectorate and all of their protectors.

See also Immortals Fear Death. Doesn't actually have anything to do with Don't Fear The Reaper.

Truth in Television - Thanatophobia, the fear of death, is one of the most common phobias in the world. That being said, No Real Life Examples, Please!

Cavella lets the kid go. Frank takes Cavella out in the wilderness and shoots him in the gut, leaving him to die of blood poisoning over several days.