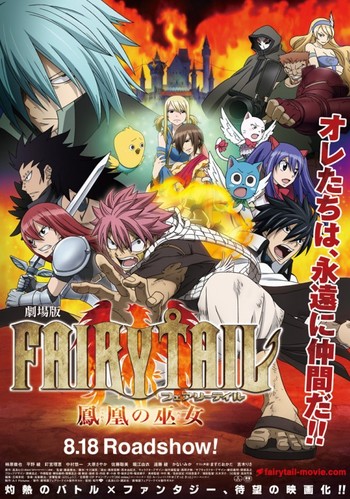 Fairy Tail the Movie: Phoenix Priestess is the first film in the Fairy Tail series. It was directed by Masaya Fujimori, written by Masashi Sogo and produced by A-1 Pictures with the story written by series creator Hiro Mashima. It was was released in Japan on August 18, 2012.

The film focuses on the titular guild coming across a young woman, Eclair (Aya Endo), who is amnesiac and doesn't know much about her past — only that she's traveling with her friend, a bird named Momon (Mika Kanai), that she holds half of a mysterious stone. It doesn't take long for people to come after her in the form of the Carbuncle guild, who act on behest of Duke Cream, the spoiled ruler of a small country named Veronica. It soon falls on Natsu's team to protect Eclair and at the same time prevent whatever Cream has in store for her.

Most of the main cast from Fairy Tail return to reprise their roles, including Tetsuya Kakihara as Natsu Dragneel, Aya Hirano as Lucy Heartfilia, Rie Kugimiya as Happy, Yuichi Nakamura as Gray Fullbuster, Sayaka Ohara as Erza Scarlett, Satomi Sato as Wendy Marvell, and Yui Horie as Carla.

The movie received an English dub from Funimation, which was released on DVD in December 2013. Since the dub had yet to cover the Edolas arc by the time of this movie's release, this dub marks the first anime appearance of Panther Lily.