Anime / Bleach: Memories of Nobody 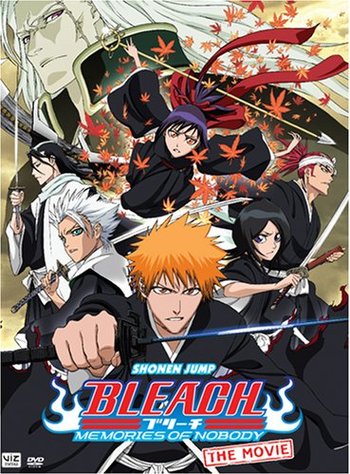 Bleach Memories of Nobody is the first film based on the Manga/Anime series, Bleach.

The story finds Ichigo and Rukia doing their Soul Reaper duties, when they come across some strange creatures known as Blanks. While trying to fight them, a mysterious girl shows up and reveals she's a Soul Reaper herself. However when questioned where she comes from, the girl, named Senna, refuses to answer and runs off. As Ichigo and Rukia to get to the bottom of this, a mysterious group calling themselves The Dark Ones, are revealed to be after her for their own reasons and soon so does the Soul Society with Ichigo caught in the middle.

Released in Japan in 2006, it was later dubbed by Viz Media and released in 2008 in a limited theatrical run before going over to Blu-ray and DVD.

Alternative Title(s): Bleach Memories Of A Nobody