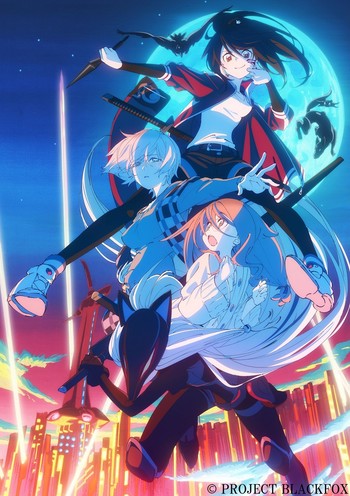 From top to bottom: Rikka Isurugi, Mia, Melissa, and the Black Fox
I'm going to find them. I'll find them... hunt them down... and avenge my family like an Isurugi should! I'm throwing away my past, my family, and my name. I'll sacrifice my future, and go wherever I can dig up any info about them. Starting now, my name is...
Advertisement:

Black Fox is an animated film produced by studio 3HZ. It was simulcasted through Crunchyroll on October 4th, 2019, and given a theatrical release in Japan on October 5th.

Rikka Isurugi is a descendant of a Ninja clan who dreams of following in her father's footsteps and pursuing science to improve the world. But on the day of her 16th birthday, armed men storm into her house. With the help of a Mad Scientist and an Esper, the soldiers kill Rikka's family in order to obtain her father's robotics research. Escaping with three Robot Buddies, Rikka vows to use her ninja training to track down the ones responsible and make them pay.

Not to be confused with the My Hero Academia fanfiction series, or the anime studio White Fox.