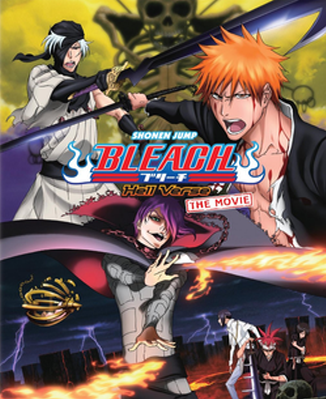 Hell Verse is the fourth and final animated film in the Bleach franchise.

In the depths of Hell, a chained skeleton slowly regenerates while witnessing a memory of Hollow Ichigo's battle with Ulquiorra.

In the World of the Living, life is going on as usual for Ichigo when he encounters Renji and Rukia on a top-secret mission, and is told to mind his own business. Out of the blue, he and his friends are attacked by four mysterious beings wearing cloaks and masks. Renji arrives, and after one of the figures is unmasked the Gates of Hell appear and the figure is slain by a massive creature. Renji explains that the cloaked figures are Sinners, those condemned to Hell, and Ichigo realizes the attack was a diversion and that more Sinners are at his home. Arriving to see Rukia engaged in combat and his little sisters being abducted, Ichigo is powerless to stop them until a Sinner named Kokuto comes to aid him and chases off the others, rescuing Karin. Yuzu is taken to Hell, and Kokuto explains that the Sinners are trying to lure Ichigo to Hell in the hopes of helping them escape via his powerful Hollow transformation. Despite this, Ichigo — joined by Renji, Rukia, and Ishida — decides to follow Kokuto to Hell to stop the Sinners and save his sister...but not all is as it seems.