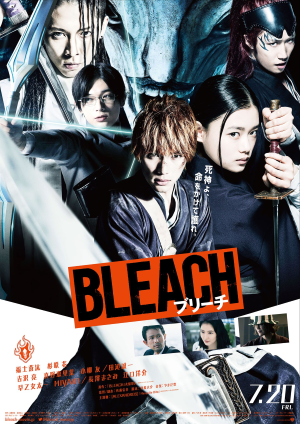 Bleach is a 2018 live action film based on the manga of the same name by Tite Kubo. Produced by Warner Bros. and directed by Shinsuke Sato, the film tells the story of Ichigo Kurosaki (Sota Fukushi) — an orange-haired Japanese teenager with the unusual ability to see spirits. Ichigo's already unusual life is turned upside-down when a young woman in a black kimono appears in his room, introducing herself as Rukia Kuchiki (Hana Sugisaki) — a Soul Reaper tasked with sending ghosts to the afterlife and slaying monstrous evil spirits called Hollows. When Ichigo's family is attacked by a Hollow, Rukia is injured and forced to transfer her powers to him, tasking him with fighting Hollows in her stead until he becomes powerful enough to survive returning her powers to her. However, Ichigo's activities draw the ire of Uryū Ishida (Ryo Yoshizawa) — the last surviving member of the Quincy, mystical archers antagonistic towards the Soul Reapers; and Rukia finds herself hunted by fellow Soul Reapers Renji Abarai (Taichi Saotome) and her elder brother Byakuya Kuchiki (Miyavi) for the crime of transferring her powers to a human.

was released on February 21st, 2018 — and was praised by fans for its accurate rendition of the manga's first chapter. The film was released in Japan on July 20, 2018 and has been picked up by Netflix for a worldwide release on September 14, 2018.

Abandon your fear. Look forward. Move forward and never stop. You'll age if you pull back. You'll die if you hesitate.