As this is a Nightmare Fuel page, all spoilers will be left unmarked. You Have Been Warned! 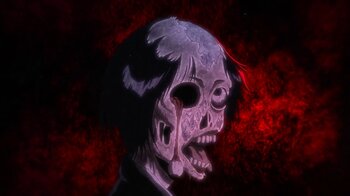 It got worse.
Advertisement:

Bleach has always been quite extreme for a series ostensibly aimed at the Shonen age bracket. Hell, even when the anime censored the gorier parts, it didn't keep them from making it bloodier, and they've occasionally made certain scenes even creepier than in the manga.

Notably, once the anime ended its run, the manga immediately went Darker and Edgier, as well as Bloodier and Gorier, to the point where you could honestly mistake it for a Seinen.