Anime / The Boy and the Beast 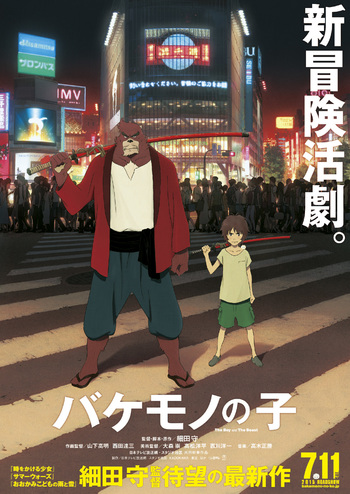 The beast and the boy.
The Boy and the Beast (Japanese: バケモノの子; "Bakemono no ko") is a 2015 Japanese animated film directed by Mamoru Hosoda, who also directed Summer Wars and Wolf Children.
Advertisement:

There are two realms: the human realm and "Jūtengai", the bakemono realm. In these two worlds which must not intersect, there lives Ren (voiced by Aoi Miyazaki as a child and Shota Sometani as a teen), a lonely boy in Tokyo's Shibuya ward, and Kumatetsu (Koji Yakusho), a lonely bakemono. One fateful evening Ren runs away from home and meets Kumatetsu, who nicknames him "Kyuta" and takes him in as his apprentice. The film follows their relationship throughout their journey.

The film was released on July 11, 2015 in Japan and on January 13, 2016 in France. The film has also been licensed by Funimation and Madman Entertainment for release in the US and Australia respectively.

You can view the teaser here

, and the next two trailers here

The Boy And The Beast contains examples of: