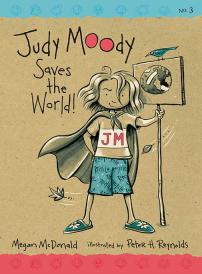 Judy Moody is a series of children's novels by Megan McDonald, aimed at kids around the age of 8-12 years old, that has been running since 2000. They tell the story of Judy, a third-grader girl.

Judy's family includes her mother, her father and her brother Stink. Other kids in the neighborhood include Judy's friends Rocky and Frank.

The books were also adapted into a live-action movie called Judy Moody and the Not-Bummer Summer that was released in 2011.