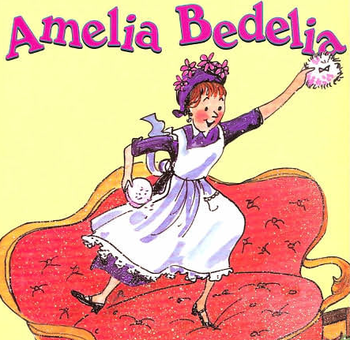 A neat way to make a character's name memorable is to make them follow a rhyming scheme, either by giving them rhyming first and last names (e.g. Jack Black) or combining their names with a rhyming descriptor (e.g. Dennis the Menace). As an added bonus, the character might also speak in Rhymes on a Dime and/or live in a place that follows a similar rhyming convention.

Because it lends the characters an air of whimsy, this trope is particularly common in nursery rhymes, children's books, and cartoons, but they are definitely not limited to them.

Compare Repetitive Name, where the character's first name is the same as their last name or uses variations of the same word. Also compare Alliterative Name, which is another method of making a character's name catchy or memorable.

Compare also Rhyme Theme Naming, where different members of the same group or family are given rhyming names to emphasize their unity. May overlap with Rhyming Title if the character's name is also used as the work's title.