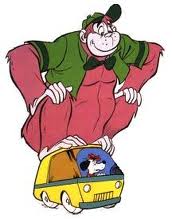 YEOW! A GORI-LI-LI-LI-LI-LI-LI-LLA!
The Great Grape Ape is a Saturday Morning Cartoon produced by Hanna-Barbera for ABC as part of The Tom and Jerry Show. The main characters were Grape Ape, a gigantic purple gorilla, and Beegle Beagle, his canine partner.
Advertisement:

Grape Ape later spun off into a Sunday morning show and competed on Yogi Bear's team in the Laff-A-Lympicsnote He's the only post-1962 character on that team. and later still cameoed in episodes of Harvey Birdman, Attorney at Law and The Grim Adventures of Billy & Mandy. He also appeared in Jellystone!.