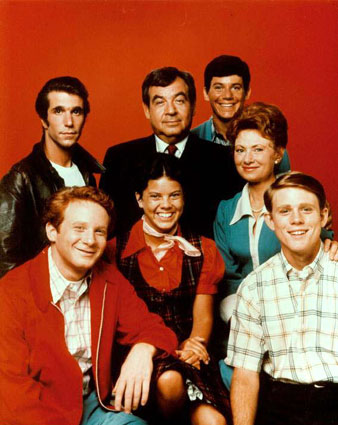 A long running sitcom created by Garry Marshall and based around 1950s nostalgia, which aired for 11 seasons (1974–84) on ABC.

Fitting for a show which launched so many spin-offs, Happy Days actually originated as an episode of the Genre Anthology Love, American Style, but also drew both cast and conceptual elements from the movie American Graffiti. It was something of a flop early on, but gradually became a ratings juggernaut and ended up having, in its own way, as big of an impact on U.S. television as Cheers or Seinfeld.

The early seasons were centered on squeaky-clean Richie, who constantly gets into trouble through circumstance, but is usually bailed out by either his parents or the super-cool Fonzie, a former street hoodlum (a pastiche of '50s greasers) who mentored Richie and his pals Ralph Malph (Don Most) and Potsie Weber (Anson Williams) whenever he could, while trying not to lose his tough-guy edge. Fonzie became so popular that when ratings were soft after two years, the show was retooled around the character: Fonzie became a co-lead with Richie, and the producers brought in a Studio Audience to cheer and applaud for the Fonz.

As Fonzie-mania turned the show into a number-one hit, the character would approach Kryptonian-like status and increasingly be used to promote social good — a change made out of necessity by Winkler and the producers, who fretted over the erstwhile hood's popularity with children.

Later, Chachi (Scott Baio) was introduced to the cast as Fonz's Mini-Me cousin in order to skew the fanbase a bit younger. By season eight (and one shark jump later), the show's timeframe had moved into the early '60s, Richie and Ralph had left to join the Army (with Ron Howard moving on to a very successful directing career), and focus shifted to Fonzie's townie friends; most notably Joanie and Chachi (who became a couple), followed by a slew of deeply unpopular replacements and newbies, none of whom had any lasting pop culture influence. HD finally ended after ten long years with a Grand Finale of epic proportions: Joanie and Chachi got married, and Howard spoke to the audience over a clip show of past events.

As mentioned, Happy Days spun off a number of shows, including a couple hits (Laverne & Shirley, Mork & Mindy) and a lot of misses (Joanie Loves Chachi, Blansky's Beauties, Out of the Blue, The Fonz and the Happy Days Gang, etc.)

Frequently parodied for being over-the-top, excessively cutesy, and having silly characters getting into ever-sillier situations, the show is also duly respected in Hollywood for cementing a number of sitcom archetypes (Richie as the nice guy, Ralph as the jokester, Fonzie as the cool ladies' man, Howard and Marion as the ideal sitcom parents). Its influence in terms of character archetypes, tropes and catchphrases cannot be overstated.

Two stageshows based on the series have been produced:

Happy Days is the Trope Namer for:

Example of:
Jumping the Shark