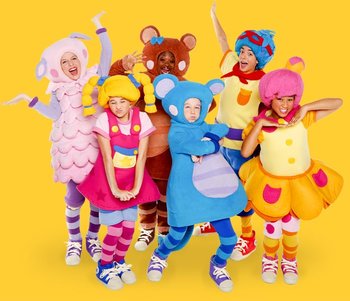 Sing a song, we'll all sing along, with the Mother Goose Club!

What do you get when you take six well-known nursery rhyme characters and modernize them? Why, Mother Goose Club, of course!

The brand's live-action content is produced in Nashville, Tennessee. There are also various animated segments featuring the cast, which, until 2017, were animated in Toon Boom Harmony. The videos are available on YouTube, distributed on Netflix, and broadcast on local PBS stations.

Not to be confused with Mother Goose Treasury.